You are here: Home / Leadership / Business Leadership and Change Management Can Be a Bear 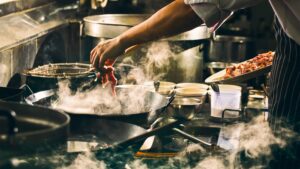 I am not a big watcher of television. But a few weeks ago, my partner and I were both quarantined (yep, COVID) and spent a substantial amount of time binge watching a really impactful series on Hulu called The Bear. The show is about a Michelin star chef named Carmine “Carmy” Berzatto who, after his brother’s death, leaves the swanky world of culinary excellence and returns home to run the family’s gritty urban sandwich shop, The Original Beef of Chicagoland. The business is struggling, the staff is resistant and disrespectful, and the city health inspector is breathing down Carmy’s neck with a laundry list of code violations. While the story itself is very rich and multifaceted, at its core, the series is truly an advanced course on business leadership and change management.

The acting is great. The story is well told. And there is just a ton to pull from related to running a challenging business.

Take this for example. After being thrown into his new role at the failing restaurant and facing considerable pushback from his disgruntled staff, Carmy patiently begins to work with individual employees to acknowledge and build upon their passions. He then leverages those talents for the betterment of both the employee and the restaurant as a whole, while leaving the worker feeling validated and energized. And that, my friend, is called employee development.

Carmy also makes hard and sometimes unpopular decisions regarding everything from new menu ideas to what can only be considered a pretty ugly compromise in terms of paying off unexpected debt. I’m not going to spoil it for you, but he definitely thought outside the box on that one. We’ll call this leadership action and innovation.

Throughout the entire show, Carmy demonstrates that, whether he knows it or not, he is an adeptly skilled business leader.

Is This About Business Leadership or a TV Show?

What I realized as I watched this television series is that we can see modeling of great business leadership all around us, I guess even while sitting on a couch weathering COVID. I recently wrote an article about the remarkable leadership skills of the Boulder County Sheriff during the Marshall Fires. I just read a story on a CEO who implemented a leadership program and made it available to every single employee in the company. I have also personally witnessed some amazing leadership initiatives within our TAB Board Meetings, even from business owners who prior to joining TAB would have never dreamed of being so bold and visionary.

And I suppose the opposite could be said as well. Most of us have witnessed some weak and questionable leadership approaches. And there is much to be learned from those experiences as well.

My point I guess is that it is important as business owners to be students of the leadership demonstrations and strategies that surround us. The good ones and the bad ones… and even the so-so ones. It gives us clarity on who we want to be as leaders and, for that matter, who we don’t want to be.

I for one want to be that fancy chef who gets his hands dirty while turning a struggling business into something special, successful, and rewarding for everyone.

And I bet you do too.

Blair Koch is the CEO of TAB Denver West, a TAB CEO Advisory Board Facilitator, and a Business Ownership Lifecycle Coach. Blair has spent most of her career helping small business owners achieve their personal and professional goals. She also hosts the Best Businesses in Denver podcast.