You are here: Home / Case Studies / Lessons from the Gym: Leading by Example 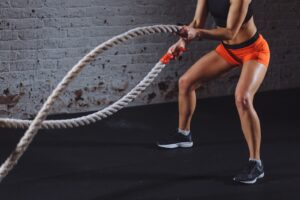 I was at the gym at 5:30am last Wednesday. I enjoy the challenge of my workouts and I am proud of the level of intensity I have achieved through a ton of hard and consistent work. I also consider it wonderful Zen time.

On this particular day, a bunch of kids started filtering in as my session was nearing a close. These young men were baseball players ranging in age from maybe 15-17 and they were buzzing about high school team tryouts coming up at the end of the month.

What started out as maybe 10 athletes burgeoned into a couple of dozen boys chatting each other up as they waited to get started with their trainer. When the group was slightly obstructing my access to the equipment I needed to finish my workout, I politely asked them to move. They just as politely obliged.

I was hitting the most challenging part of my workout which included pulling a 75-pound sled stacked with another 160-pounds of weights, then moving on to one-on-one combat with the battle ropes. Super challenging for me and now I knew all those kids were watching. I am not going to lie, I was intimidated. Mortified, really.

While still hyper-focused on my workout, a big part of me wanted to prove myself to these young athletes. I just didn’t want to fail in front of them. Realizing that I was old enough to be at least their mother, I tackled that darn sled and battled those ropes with all I had left after an already grueling workout.

Then it happened. Out of the corner of my eye, I could see mouths drops and heard murmurs of amazement. And what started out as perhaps a little embarrassment and self-doubt on my part, transformed into something so much better. It turned into pride.

My trainer later told me those boys couldn’t manage those ropes like I had. I am not sure that I believe him, but I certainly felt that I surprised a few of those athletes without uttering a single word.

This story is not really about the gym though; it is about leading by example.

This story is about leadership and focus and discipline and working hard – on the field, in our businesses, in life. As business leaders, we have so much to teach and so many behaviors to model. We set the bar for excellence, even when we aren’t sure we have an audience.

Imagine if I had simply tried to explain to those boys the value of pushing that weight or swinging those ropes. Would it have been as impactful? Of course not. As leaders, walking the walk is so much more powerful than just talking the talk. Influential leadership in the workplace – or in the gym – is about setting the tone for greatness.

I would like to think I left an enduring impression of excellence on those young athletes.

I am pretty sure I did.

Blair Koch is the CEO of TAB Denver West, a TAB CEO Advisory Board Facilitator, and a Business Ownership Lifecycle Coach. Blair has spent most of her career helping small business owners achieve their personal and professional goals. She also hosts the Best Businesses in Denver podcast.